The Scooter Track emerged from an idea put forward by the Schauinsland cable car (belonging to Freiburger Verkehrs AG) in 2000, in cooperation with the forestry commission and other authorities. At the beginning, the Scooter Track was run by the cable car company itself and had 10 scooters available. Later on, the scooter track and its first generation of road scooters (which were not suitable for off-road terrain) were passed on to Bikers Paradise KG, which pushed forward the further development of the scooters. Attempts to reinforce the scooter frames had no real impact on increasing their longevity and thus began a lengthy optimisation process. Bikers Paradise KG became Amentes KG. A lack of funding, economic problems and also mistakes by management led to Amentes KG becoming insolvent in August 2006. On 15th September 2006, Steiber GmbH/ Freiburg (as only interested party) took over the Scooter Track to keep and develop the leisure activity of the Schauinsland Mountain. Extensive investment took place to improve the scooter track including signage which in turn led to a rapid improvement of the then renamed Downinsland Scooter Track, making it a unique touristic feature for the Schwarzwald. Thanks to our current stock of 50 off-road / downhill scooters we are capable of offering our service even to large groups.

With the beginning of the year 2016, Forschergruppe Steiber, the operator of Schauinsland Mining Museum took over the Downinsland Scooter Track from Steiber GmbH. Thereby, the three leisure companies described below

are now united under one umbrella company. Simple handling for the customer with just one point of contact is the aim of this takeover; “New German” synergy effects.

The Downinsland scooter track Schauinsland / Southern Black Forest near Freiburg offers a very special kind of adventure, coupled with an intensive experience of nature. Using downhill scooters with high performance hydraulic disc brakes, you will travel over specially prepared and signposted forest paths all the way to the valley station. Starting at 1220m (issuing point at the mountain cable car station) you will scooter through the Schauinsland nature reserve with its deciduous and coniferous forest and stunning views towards the Rhine Valley, the Kaiserstuhl and the Vosges Mountains. In around an hour you will travel 8km downhill with an altitude difference of 750m. 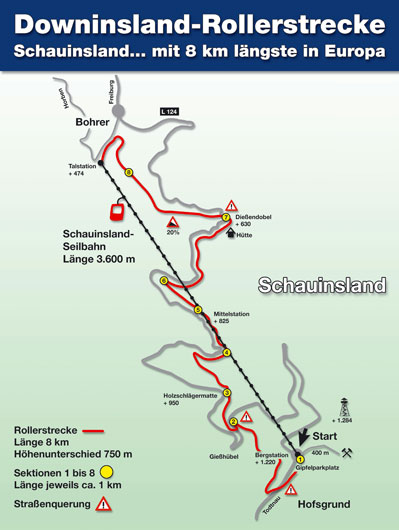 The Downinsland Scooter Track is divided into 8 sections of around 1km each, and crosses over 3 roads, which requires particular attention. The route has been chosen for its suitability for downhill scooters.
Over 70 signposts, being placed just 200m apart from each other should prevent anyone getting lost. If you do take a wrong turn you will see a stop sign which reads ‘you have left the Scooter Track, go back!’
Mountain bikers and hikers are informed by such signs not to use the scooter track, as the Schauinsland offers many alternative routes for their use. Nevertheless, it is important to keep at a speed which enables you to stop at any time, to prevent putting others in danger!

Safety philosophy for the Scooter Track

The many crossways drainage gullies at the start of section 1 are there to limit your speed and give you time to get used to the handling characteristics and safe use of our downhill scooters. In the following sections it is possible to pick up speed until section 7, after the 3rd road crossing. For reasons of safety, participants go down in loose groups, but are always able to go down at a speed which is comfortable for them personally.

We explicitly warn participants of the risks of serious falls caused by not monitoring their speed. We therefore warn against excessive speed. The scooter’s low centre of gravity enables high lateral acceleration. This, in combination with an overestimation of one’s ability and reduced traction due to dry paths can cause dangerous situations. The high performance brake discs are specifically designed for the length and altitude difference of the Downinsland Scooter Track. The importance of correct braking as a safety feature will be pointed out clearly! In order to prevent the brakes from being overloaded, the weight limit for scooter riders is 120 kg. We hope this offers some guidance. Don’t worry though, we won’t weigh you to check.
Further information can be found in the sections Scooter Physics and Correct Braking on the Technical Information page.

This safety philosophy is particularly important today as the type of people who use the scooter track has changed significantly since its beginnings in 2000. Back then only ‘freaks’ with experience of mountain biking took part, nowadays it attracts amateurs with no experience of off-roading, who simply enjoy our unusual sporting activity.